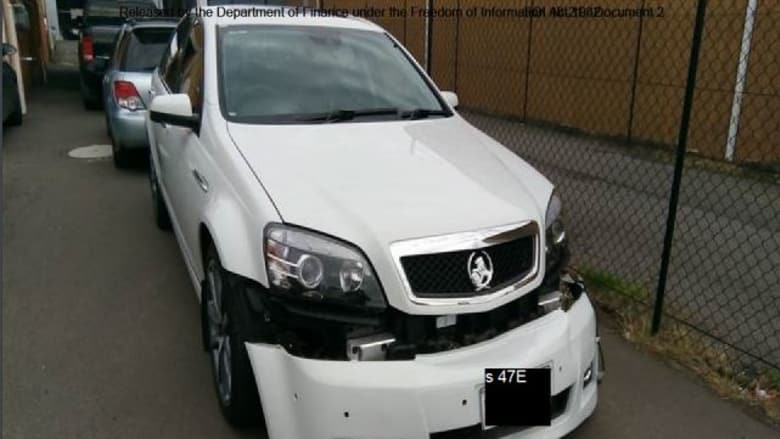 On June 1st The Sydney Morning Herald (in Sydney, Australia) reported damage to three Comcars* amounting to nearly $30,000. The accidents occurred when perimeter security bollards rose under cars while they were driven over the bollards outside the entrance to Parliament House in November, 2017.

The article was titled: “What does it look like when a bollard is raised on a Comcar?” The photo above, courtesy of the Australian Government Department of Finance, shows one of the cars. The article also mentioned two other vehicles had incidents.

Little details of the incidents were reported, with only a brief mention that the automated system had been turned off and the manual system was on and interfered with by other work going on in the vicinity. The security bollards were installed in 2005 and an investigation was called for in February.

* According to the Australian Government Department of Finance Website, a COMCAR is part of the agency “…which provides car-with-driver and other ground transport services to the Prime Minister, Governor‑General, members of parliament, judges and international guests of government.”

Baton Rouge Security Bollards Have Their Own Way

WBRZ in Baton Rouge, LA reported last week (June 22nd) a perimeter security bollard rose up smashing a car while it was trying to enter a secured parking lot. The action tore off the sedan’s bumper, damaged the side and left the car dangling above the pavement.

The article and a video appeared on June 22nd under the name “Cheeky Capitol parking lot security system strikes again”. The three year old system also apparently, and repeatedly, claimed cars in 2015. One state representative even sustained a mild concussion and broken hand when his Audi was damaged.

Note: Not all automated perimeter security bollards malfunction or work erratically. The vast majority are extremely reliable and work without incident.

Once again, please call ECI at 847.949.0134 for your perimeter security bollard needs, including turnkey installations. Or click below for direct contact information.