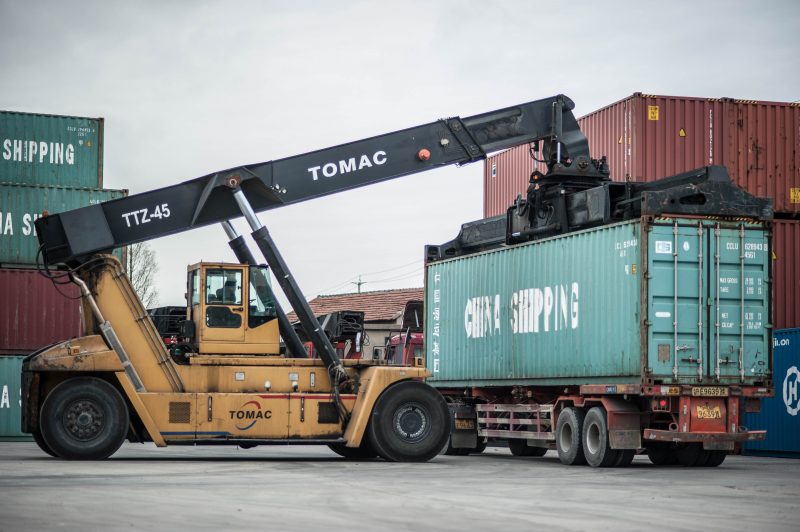 Telehandler working on the docks.

I recently reported in “Ram Raid Culprits Again Use Heavy Construction Equipment” that perpetrators used a heavy construction telehandler with a telescoping arm in a crash and grab in Scotland. Prior to that I also reported another use of a telehandler in “Video Shows Different Vehicles in Crash and Grab | Ram Raids“.

I recently viewed a must see video of another ATM attack reported by Cambridge News in England just a few weeks ago. It was titled “Jaw-dropping video shows shop front destroyed in £90K ram-raid“.

An on site video camera captures this night time attack on a co-op store in St. Ives. A stolen “JCB” teleporter rolls up and stops just short of the protective security bollards. Two other men watch as the telescoping arm is deployed. It just destroys the front of the store, dragging the ATM outside.

Then one of the men wraps a strap around the ATM which is lifted into the back of a pickup truck which pulls away. Another car was also used in the attack for part of the gang of five to escape. The ATM contained almost $120K in British pounds. What they did not know was that there was a tracking device in the ATM.

Police officers followed the ATM’s tracking device and spotted the pick up truck involved some 22 miles away. They were able to retrieve the cash but the driver escaped.

Police also found the other car involved in the crime. Three occupants, each wearing a balaclava (ski mask covering the face while exposing just the eyes and sometimes the nose), were in it. The men fled but one removed his balaclava which was later found by police.

That robber was actually caught because of the incriminating evidence left on the balaclava at the scene. He was later snared when DNA revealed his identity through forensics. The man was tried and pleaded guilty and is now serving a jail sentence. The four other men involved in the crime have not been identified.

A four wheel drive teleporter is similar to a forklift. It is used in construction wokl. Their telescopic booms can be fitted with various equipment such as claws or diggers, forks (for lifting pallets), buckets, etc.

We continue bringing you incidents such as this in hope to alert you to these jaw dropping ram raid assaults using heavy construction equipment to steal ATMs and valuables.

Feel free to call ECI at 847.949.0134 for a no obligations site threat assessment. Or click below for direct contact information.