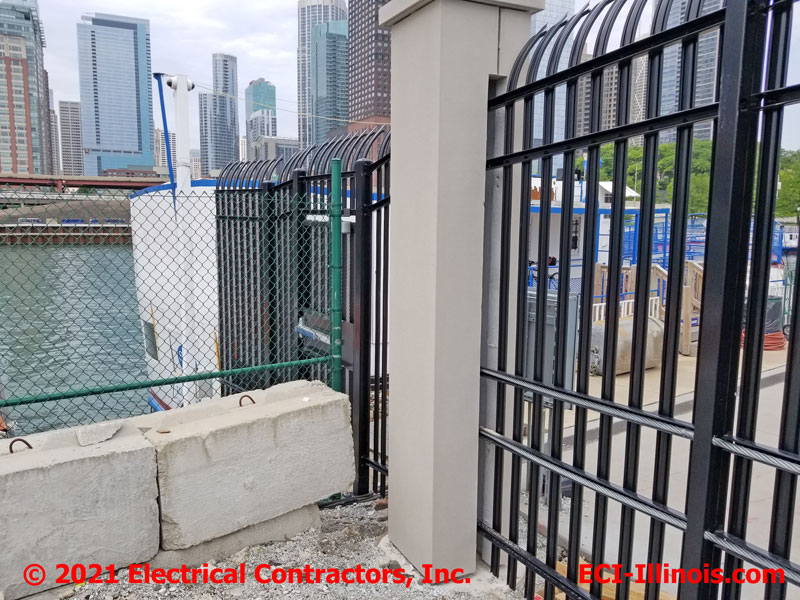 Helping secure the Chicago Harbor Locks area is a project ECI was involved with for a considerable period of time. This was the result of the extensive scope of work that was involved.

The goal was to provide high-security protection to prevent using vehicles (perhaps loaded with explosives) from crossing over from the Navy Pier area into the property and then proceeding to the locks.

I will describe some of the equipment as well as the work ECI did in several blog articles on this website. I will also share many of the before and after pictures we have.

If you are a stranger to Chicago, Navy Pier juts out into Lake Michigan east of the Outer Drive. To get you properly oriented, direct access would be gained by driving east on Grand.

The water purification plant lies to the north of the pier. Just south of Polk Brothers Park (west end of the pier) there is a stretch of land south past Lakefront Trail. Its southern border ends at North Pier which also extends further east into the lake. 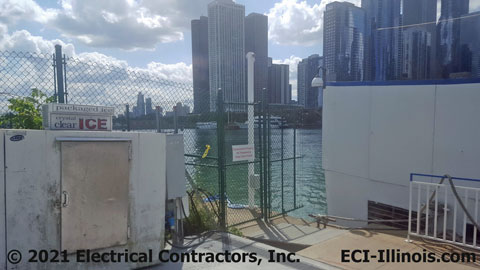 A very old cyclone fence, a cyclone sliding gate and people gates previously separated the properties. The fencing was well worn and deteriorating as shown in the image to the left. This view is actually looking southeast towards the hi-rise buildings along Lake Shore Drive and into downtown Chicago.

The banner image above shows a small portion of the new K-12 Rated fencing and the concrete column which was poured over the security bollard joining the fence sections.

Please take note of the two channels about three feet from the ground. They appear to be painted silver, unlike the remainder of the black fence. These are, in fact, steel cables that give the fence the K-12 Rating.

The person-gate is shown beyond. There is also a wing that extends over the water to try and prevent someone from easily climbing around the fence. You will see another wing in more detail in a future picture.

And feel free to contact ECI at 847.949.0134 for your security and access needs, including fencing, automatic sliding gates, security bollards, and more. We deliver turnkey installation to maximize your investment and minimize your headaches. Or click below for direct contacts or to use our Contact form.