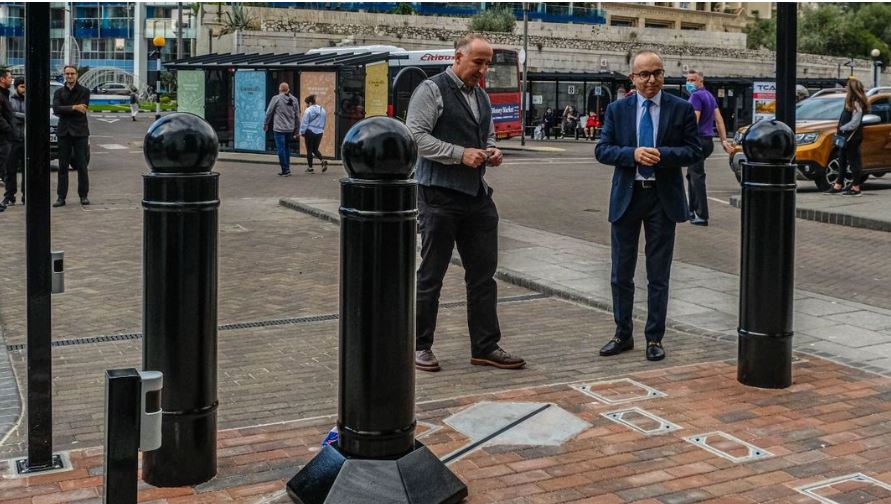 Here’s a first for this column – I am reporting on a new security bollard installation in Gibraltar. This famous promontory is, of course, located on the southwestern tip of Europe at the gateway to the Mediterranean Sea.

The system is comprised of a total of three security bollards. The two at either end are fixed while the middle bollard moves on a slide mechanism.

When the middle bollard is closed and parallel to the two fixed bollards, the system provides protection against terrorist attacks using vehicles. Pedestrians, bicyclists and strollers can pass through between the bollards.

When activated, the middle bollard ‘slides’ to allow an authorized vehicle to drive through. They must proceed at a reduced speed because of the opening distance between bollards. A secondary goal is to also regulate traffic movement.

It was impossible to excavate deeply at this location because of the existing infrastructure in the ground. The system can be surface mounted when bolted to a proper base. It can even be removed and used elsewhere.

The system is the first of its kind in the area. If the test proves feasible, additional units will be installed to protect the town’s center.

According to Wikipedia: Grand Casemates Gates, formerly Waterport Gate, provide an entrance from the northwest to the old, fortified portion of the city of the British Overseas Territory of Gibraltar, at Grand Casemates Square.

Call ECI today at 847-949-0134 for all of your perimeter security bollard needs, including maintenance and service on existing equipment. Or you can click on the button below to link to our contact page which has direct contact information.