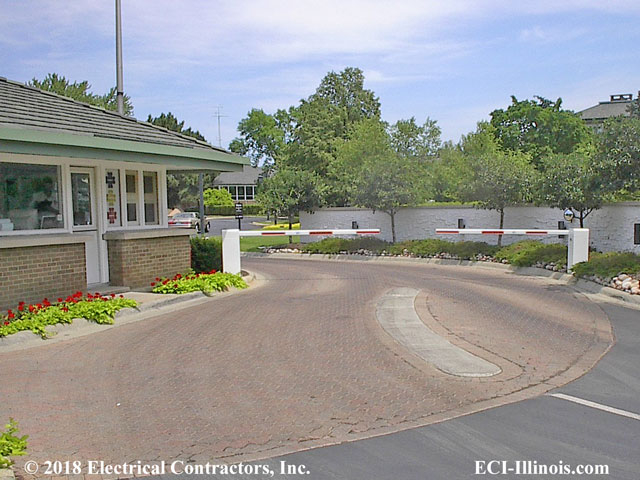 Here is a very interesting case study where ECI solved a pressing problem for the Oak Brook Club in Oak Brook, IL. This is an example of a gated residential community where entrances are typically controlled or guarded to prevent unauthorized entry. The above photo shows a “before” picture of the guard booth and adjacent entry lanes to the condominiums located on 16th Street near Spring Road.

The guard shelter is to the left and there were (and still are) two barrier gates for the entry lanes. Residents were visually recognized by a guard who then activated a switch in the guard booth to opened the barrier gate.

Guests drove up to the window in the guard booth in the left lane and introduced themselves. The guard would open that barrier gate with another switch once the visitor was approved. For larger vehicles, the guard manually opened both of the entry barrier gates.

Now here is where it got interesting…

A relay system was in place in the guard booth which would signal the guard with a light if a resident had mail available. The guard would then have to literally flag down the resident as they drove in to let them know they had mail to pick up.

At the time ECI was called, this relay system was broken and we were called in to repair it. Unfortunately, it was beyond repair but ECI did come up with a solution and an improvement. The remedy will be revealed in Part II of this story.

Use of Barrier Gates

Barrier gates are used almost exclusively to symbolically prevent vehicles from entering an area or to stop them and collect a toll. They are not constructed to stop moving cars or trucks.

When down in the horizontal position the gates span across a lane of traffic. They are nearly vertical when opened to allow the vehicle to pass unobstructed. The message they nicely convey when closed is “you are not yet authorized to enter” or “pay us and we’ll let you pass”.