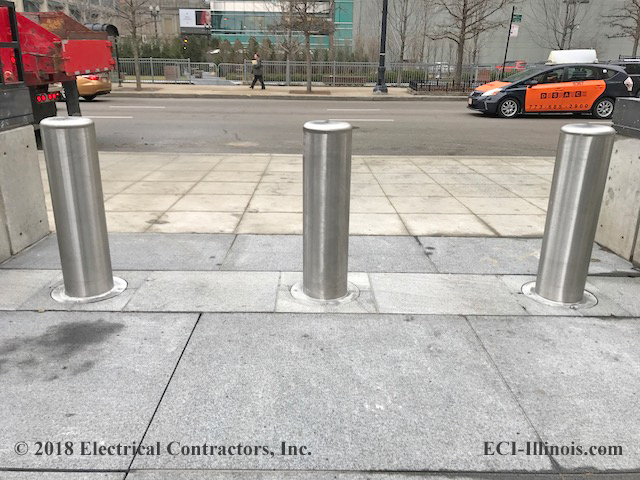 We at ECI have, of course, written about perimeter security bollards on several occasions. As pictured above, bollards are strong posts meant to stop vehicles from entering secure areas. The ones shown in the image are manually removed and reinstalled. Other security bollards can be automatically raised or retracted while others are permanently installed.

Some security bollards (as above) are crash rated, or K rated, and must meet stringent government testing standards, while others are not. The former are used in high security applications while the latter are used to mainly protect against accidentally damage to equipment by vehicles.

Recently we found some interesting articles about bollards enhancing perimeter security in various applications. These include a Maryland high school, a California farmers market as well as in our nation’s capital.

Perimeter Security Bollards in the News

“Security bollards to be installed at SDHS entrance” was reported on March 8, 2016 by the OC (Ocean city) Today. County commissioners and the local sheriff discussed installing perimeter security bollards at the entrance to Stephen Decatur High School in Worcester County Maryland at a closed session meeting. This move was previously suggested but never acted upon.

The proposal was unanimously agreed upon. Perimeter security bollards are to be purchased and a local construction company is donating labor and concrete. Work will be done in two phases, with the first starting soon and the second when school adjourns for summer break.

The Washington Post reported the “Nation’s capital overhauls parking restrictions to guard against terror attacks” on February 27, 2018. The city is evaluating measures to protect pedestrians and crowds from attacks where perpetrators use cars or other vehicles to mow down citizens and visitors. New parking rules are being established for parade routes in an effort to increase security and safety for Washington, D.C. “…participants, spectators, residents, and visitors…” Strategies mentioned in the article include perimeter security bollards and other security barriers.

Charles Allen, D.C. Council member, was quoted as saying the city must prepare by making “reasonable and smart and strategic investments” in security bollards as well as other tools to protect residents. The director of the city’s homeland security and emergency management agency, Christopher Rodriguez alluded to the merit of considering installing security bollards to protect some of D.C.’s strategic locations but that “bollards alone couldn’t prevent an attack”.

And finally, on February 26, 2018 The Tribune News reported the approval by the San Luis Obispo City Council to enhance security at its weekly Farmers Market. Numerous street entrances will have security bollards installed at a cost of nearly $1.3 million. A combination of both automatic and manually removable devices is planned. Construction is anticipated to be complete within a year. This, according to the article, is in response to the 2003 “…infamous Santa Monica incident and other crashes at crowded festivals and farmers markets nationwide in recent years…”