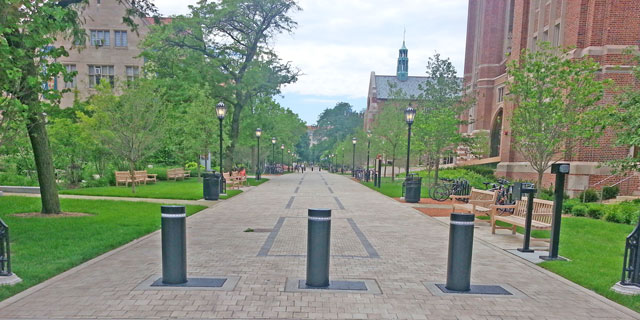 Bollard Installation by ECI-Illinois in Chicago

Bollards help protect people, buildings and property against unauthorized vehicles attempting to penetrate designated areas. This type of anti-ram, counter-terrorism barrier is used extensively by the United States Department of State (DOS) to protect its embassies. They are also used where perimeter security is a priority.

Fixed Bollards are fixed in place and used to deny entry of a vehicle away from a typical vehicle access point (i.e. a vehicle crashing into the front of a restaurant). They do allow access to people on foot or with bicycles.

There are four general types of bollards, those placed or installed:

Fixed bollards are usually made of galvanized steel and filled with concrete. The bollard covers are decorative and made from a number of materials including aluminum, stainless steel or bronze and can be fitted with internal lighting for increased visibility.

Operable (active) or retractable bollard systems can be raised or lowered automatically or manually. They are often used in high-traffic entry and exit lanes where vehicle screening is necessary. They can also be used in parking garages and building service entrances.

Removable bollards are another type of bollard that can be used for occasional and emergency access. They are generally installed as the threat levels require and then removed after.

The DOS developed the commonly used crash testing standards. For certification, the barrier must be tested by an independent crash test facility and meet DOS standards. The test specifies perpendicular barrier impact by a 15,000-lb. (6810 kg.) diesel truck.

“To become certified with a DOS “K” rating, the 15,000-lb. vehicle must achieve one of the K-rating speeds, and the bed of the truck must not penetrate the barrier by more than 36 inches. The test vehicle is a medium-duty truck such as those that any driver with a commercial license can buy or rent. Note that the amount of intrusion is measured to the front of the cargo bed of the truck, where explosives would typically be located …” per chapter 4, Perimeter Security Design

Crash rated, anti-ram bollard systems are designed to effectively stop a vehicle and its cargo as quickly as possible and also not create an opening for a second vehicle to pass in a counter-terrorism application.

Contact ECI-Illinois for your personal site inspection, assessment and suggested applications for your particular requirements and safety protection.

This is meant for informational purposes only. Please refer to the Federal Emergency Management Agency (FEMA) or U.S. Department of Homeland Security for additional information and details regarding standards.