Were The Installed Bollards Really A Dangerous Security Flaw 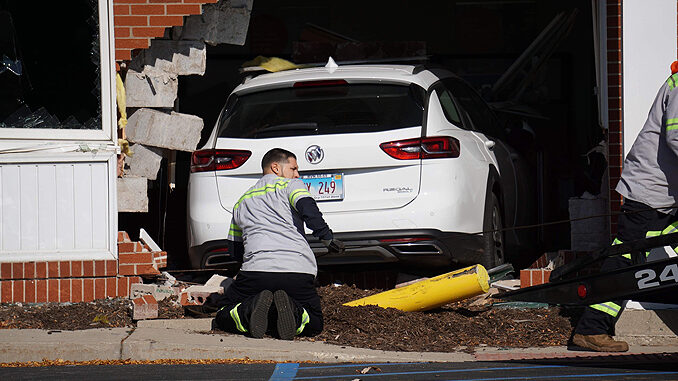 Last year I wrote about a car crashing into a bank in Fox River Grove (see image above). It was entitled: “Win For Car Versus Bollard Which Was Not Up To The Challenge“.

I questioned the author’s view that the bollard was not properly installed “…with not enough of the post below ground.” Was the bollard installed to stop a low-speed bump? Or a crash and grab raid?

Earlier this year Kansas.com showed an interesting video in an article “Crash exposes dangerous safety flaw at Intrust Bank Arena; county investigating”. I tried to embed the video but was not successful. You’ll need to link to the website to see it.

The 25-second video shows a white Dodge pickup truck violently crashing into the arena first at high speed, then at slow motion. The truck appears to be out of control and on two wheels as it approaches from the left at the slower speed.

A still image further later in the article shows one concrete bollard tilted off of its base. An adjacent bollard is completely gone with only part of its jagged base remaining. The truck had rolled through the bollards as well as some fencing and then crashed into a brick wall. It hit the bollard with enough force to propel it through a plate glass window.

The author clearly writes there was a “dangerous flaw” with “concrete bollards that not only can’t stop a speeding car, but can become dangerous projectiles themselves.” Once again I can claim we may view this as a misleading headline in an effort to gain readership. There are some questions to be asked and answered.

We do know this was a high-traffic area. I counted over two dozen bollards in a frame when I paused the video. And this is just part of the arena access!

But were the bollards meant to stop a low-speed intrusion? Or were they supposed to be crash-rated and intended to stop a high speed terrorist vehicle when they were installed as a security measure in 2017?

The crash was at night with no pedestrians in the area. When crowds are present are additional traffic control security measures put into place such as movable anti-ram barriers?

We will just have to see what the investigation requested by the County Manager revealed.

What is your risk to people and property? Call ECI today at 847.949.0134 for an evaluation of your security needs with regard to perimeter security bollards or other security needs. Or click below for direct contact information or to use our contact form.